The distribution of landforms that were formed by ice tells us a great deal about past climates. One of these types of landforms is the rock glacier. Rock glaciers are a transitional form between glaciers and frozen debris characteristic of high latitudes and altitudes. They consist of a rock and ice mixture, with enough ice in the mixture so that it deforms under its own weight like a glacier does. To overcome the yield stress of the mixture, a rock glacier must be at least 10 m thick, but is typically tens of metres thick. The deformation results in the rock glacier flowing very slowly down slope often producing spectacular tongue shapes. Rock glaciers are common in dry mountains where there is permafrost (the temperature below the ground is always 0 °C or below), where there is an abundant supply of rocky debris and where precipitation is relatively low (otherwise ordinary glaciers would form). The lower altitudinal limit of discontinuous permafrost with a mean annual air temperature of -2 °C is probably a good limit for rock glaciers.

The only rock glaciers in Africa were postulated to be in the Eastern Cape of South Africa by Lewis and Hanvey in 1993, published in the Transactions of the Royal Society of South Africa. They identified a series of debris accumulations at the mouths of valleys facing onto the Bottelnekspruit valley. The valley is formed out of the white Clarens Formation sandstone overlain by basalt of the Drakensberg Formation. The argument for a rock glacier origin was based around gross morphology and some sedimentary observations. These authors estimated that the mean temperature of the area would need to have been at least 14 °C lower than present for the rock glacier to form. Given what we know of sensitivity of temperature to greenhouse gas changes, this seems very high. As part of our study of the cold climate geomorphology of South Africa1, we included the Rose Hill landform to re-investigate its interpretation.

On approach to Rose Hill we were surprised to see areas of Clarens sandstone, distinctly white, poking through the surface of the mapped rock glacier. Rock glaciers will typically not merge with bedrock because they flow and so bedrock is an impediment. We re-surveyed the section at the front of the glacier where the Bottelnekspruit has cut through the front of the deposit. At 12 m thick, the deposit is at the lowest end of viability for a rock glacier. However, the representative sediments are actually thinner than this. The lowest beds are oriented solifluction debris. Solifluction is the process whereby soil flows because of water saturation and frost heave, typical in periglacial environments. The bed is oriented away from the nearby bedrock, not in the direction of where a rock glacier would have flowed from. The beds above this have water sorted stream gravels, meaning they were at the surface when the deposit was accumulating – impossible for a rock glacier which flows as a mass and doesn’t accrete vertically. The beds above this are 5-6 m of poorly sorted mixtures of fine sediments and boulders – not out of place on a rock glacier particularly since reverse grading occurs, but not diagnostic either. There is no evidence of flow or stress in the form of deformation of the lowest beds. The landform is convex in profile, whereas melted rock glaciers tend to be concave in profile because of thermokarst where the ice melted out, typically in the central ice-rich portions of the rock glacier. Lastly, Lewis and Hanvey noted fracturing of quartz grains, possibly frost shattering, in the upper units so it is useful to look separately at the origin of these units separately. 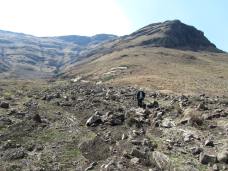 When we arrived in August there had been some late snow which was still clinging to the highest shaded areas of the mountains around Bottelnekspruit. The surface of the “rock glacier” had a lot of fine debris, which is unusual because this is the active layer where coarse material is sorted to the surface and fine material sieved down during seasonal freeze-thaw. Issuing forth from a series of gullies at the head of the deposit was a debris flow triggered by the melting snow. This was a mixture of large blocks and fine sand spread out of the surface of the deposit. This would have been carried down by a rapid flow of water, possibly mixed with snow. Close inspection revealed that many blocks had impact scratches (see photos), that looked for all the world like glacial striations. However, there are clear differences in that the scratches are more random and there are no polished or shaped facets. The sediment looked clearly similar to what was exposed in the upper units down on the valley floor. Therefore, here was a mechanism for producing the debris accumulation. A series of debris flows, most probably more frequent during the last ice age, but continuing to the present, had accumulated. A radiocarbon date of 21,000 years in slopewash in one of the other debris accumulations in the Bottlenek valley dates the height of the last ice age and therefore supports this interpretation. The fracturing of quartz grains can be explained by the prevalence of frost in the upper catchment. Therefore Rose Hill is a composite landform resulting from an accumulation of sediment as a result of mass movement processes such as solifluction and debris flows over time with some contribution of sediment, or at least reworking, by the Bottelnekspruit. Rock glaciers are valuable indicators of cold climates but it remains to be demonstrated that there are any in Africa.

One thought on “Ice in the Dragon Mountains (II)”