The longest land terminating margin for an ice sheet lies in western Greenland. The Greenland ice sheet is the second largest ice sheet in the world and the only remaining one in the northern hemisphere after the last ice age. The ice sheet covers about 80% of the surface of Greenland and most of its terminus is in the sea. The west is an exception where it terminates as a series of lobes where the ice is controlled by local topography. One of these glaciers is the Russell Glacier, which lies inland of Kangerlussuaq, meaning “big fjord” in the local language. Kangerlussuaq is built on the infrastructure of the American Sondrestrom Air Base, a cold war early warning line base. The US first occupied the area following the fall of Denmark to Nazi Germany in WWII. The proximity of Kangerlussuaq, now a major logistics hub, at the top of the fjord makes Russell Glacier one of the most accessible glaciers to study in Greenland.

In the summer of 2017, my colleague Steven Palmer, our Phd student Oliver Bartlett and I travelled to Greenland to study Russell Glacier and the glacier foreland in front of it. Our trip had a number of goals, the outcomes of which would form the basis for Oliver’s PhD thesis. The first was to survey the glacier front using our UAV. We conducted repeat surveys at the steep walled margin where the meltwater undercuts the ice. Not quite the ice wall of Game of Thrones, but up to 60 m vertically nonetheless. We also tested an infrared camera to map debris cover on the ice. The second was to survey a variety of landforms in front of the ice to create a 3D map for use in glacier modelling. The depth of the ice of the Greenland ice sheet is usually determined using radar. However, this is problematic at the margins where the ice is thin and fractured. We hope to improve the ability to determine ice depth using synthetic radar returns made using our surveys of former subglacial topography. Lastly, we collected samples for exposure dating using cosmogenic nuclides. At the end of the last ice age the ice retreated very rapidly across the coastal plain. Using dating, we can determine how fast and help identify the controls on glacier retreat. 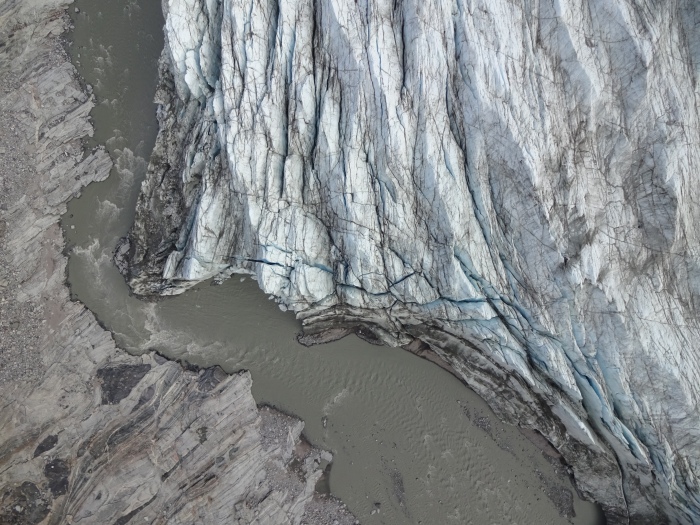 The 3D model above was made using aerial imagery collected in 2007 by the Natural Environment Research Council Airborne Research & Survey Facility (NERC ARSF). The imagery was collected as conventional aerial photography by a Dornier 228 aircraft. The ground sampling distance of the photography is about a metre. We repeated these photographs using the drone, which enabled us to collect imagery at a sampling distance of 5 cm, or twenty times better. There is noticeable change over the last 10 years. In 2007 the glacier was fully occupying its moraine. However, now it has thinned and retreated noticeably within its margin. Once processed, our imagery will provide a much higher resolution picture of changes in this important ice front than ever before.